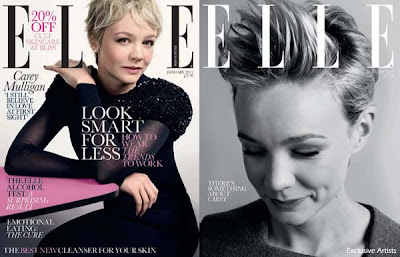 I always look forward to the latest issue of Elle UK, being my favourite commercial fashion magazine it report a lot about fashion, while minimising all the other crap you find in other magazines. For the January cover like the other British fashion mags, Elle has opted for british beauty Carey Mulligan shot by David Slijper. Having been nominated for an academy award in 2009 for her role in An Education, Mulligan has become popular in the movie industry landing roles in The Great Gatsby  and Never Let Me Go starring Keira Knightley. Mulligan's cover is interesting, suiting the concept of 'smart' though I'm waiting to see Mulligan pushed into a new image especially in magazines. A definite buy anywho.
MARTANx
Labels: 2010, Carey Mulligan, Covers, Elle UK, Magazines
Newer Post Older Post Home