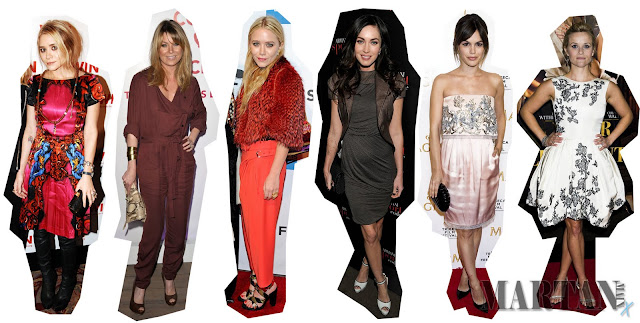 Ashley Olsen - In fruschia printed Prada dress from their spring 2011 collection, Ashley Olsen attended the Woman in Need's Commit to WIN Dinner in New York.
Ellen Pompeo - Attending a funraiser hosted by Coach for the Children’s Defense Fund Pompeo wore a port Stella McCartney jumpsuit and matched it with a snakeskin Coach clutch.
Mary-Kate Olsen - At the premiere of 'The Union' in New York, Mary-Kate Olsen wore a red fur bollero, matching coral pants. (If anyone knows who they are by shoot me a comment!). I love love love this look, the colours are so bold and daring.
Megan Fox - Promoting the latest 'Armani Code Sport' fragrance in New York, Fox wore none other than Armani to the event. I love love love the structured jacket with the dress, playing up with her silhouette and giving her a bit of edge.
Rachel Bilson - Bilson attended the 2011 Tribeca Film Festival in Chanel Couture from their 2010 collection. Bilson went with Karl Lagerfeld as they showed their new Magnum Ice Cream short films at the festival.
Reese Witherspoon - In New York for the premiere of her new film 'Water for Elephants' Witherspoon wore a white Jason Wu dress. I love the black floral detailing and the skirt.