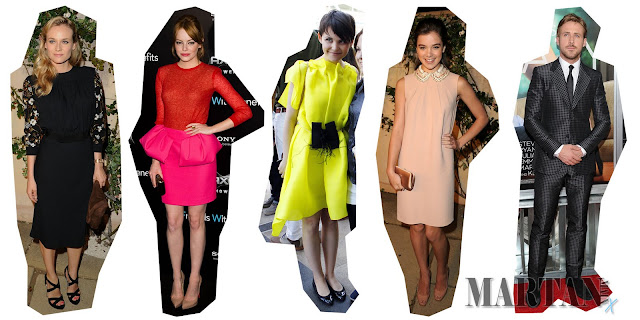 Diane Kruger - Attending Miu Miu Presents Lucrecia Martel's 'Muta' Event, Kruger wore none other than Miu Miu. Kruger wore a Fall 2011 dress featuring embellished sleeves. She accessorized her look with an oversized Miu Miu clutch (I've been eyeing that clutch for a while)

Emma Stone - In a Giambattista Valli sweater and skirt from their Fall 2011 collection, Stone was in New York at the premiere of her new film 'Friends with Benefits'. The look works great, love love loving the colours and the peplum skirt.

Gennifer Goodwin - At the 2011 Comic-Con, Goodwin donned a fluorescent yellow Roksanda Ilincic dress from their 2011 Resort Collection. I'm continuing to love love love Goodwin's style the loud dress works well with Goodwin, she knows how to pull off a statement look.

Hailee Steinfeld - The face of Miu Miu was at the Miu Miu Presents Lucrecia Martel's 'Muta' Event in well... Miu Miu. Steinfeld's dress looks adorable on her, the sheath dress with the embellished collar. This is one of the few looks where Steinfeld looks young and chic.

Ryan Gosling - This is Gosling's second appearance on the list, making him the only male. Gosling was in New York at the premiere of his new film 'Crazy, Stupid, Love'. Gosling wore a Gucci 2012 suit, love love loving the print on the suit which fits tres amazing on him.