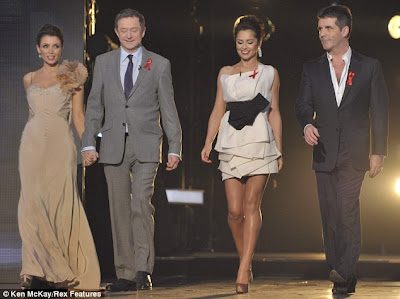 With the X Factor finishing next week, the final 5 contestants performed club classics in hope to secure a place in the finals. This year the finals are deemed different with four contestants moving on to the finals. Cheryl and Dannii battled it out for the most stylish but however unlike previous years good old Minogue has one upped Cheryl Cole once again in a lavish nude Aurelio Costarella gown. Cole also seems to have too much make up on her, who is styling Cole really? She has looked so good in previous seasons ah well..
The show was great, though I must say without good old Wagner the competition has become more picky and there is an emphasis on the vocals and overall performance. One Direction tried to cover Rihanna's Only Girl (in the world) and failed, Mary lost the timing when singing Gloria Gaynor's Never Can Say Goodbye. But with all technicalities it was great television. I'm very eager to see who gets through to the finals!
My Picks are over the Jump.
MARTANx


My favorite Rebecca Ferguson showed another side of herself performing two contrasting songs, Show Me Love and Amazing Grace. Ferguson was described by Cowell as a "Class Act" I hope hope hope she advances to the finals and takes the crown. Another great performance was by Cher Lloyd and her rendition of the B.o.B song Nothing On You. I have a love hate relationship with Lloyd's performances but I did like this one, it was clean and fun.
Love love love the ladies of the X Factor... can I smell a third win for Cheryl Cole?? x
Labels: 2010, Cher Lloyd, Music, Rebecca Ferguson, Television, X Factor
Newer Post Older Post Home