When I started uni my friend Steph began to refer me as her own Mini Gok.

Now I didn't initially know what she meant... though upon research I came to know who Gok Wan was.

Then when I traveled in Ireland, wearing my glasses and my hair up out one night I was asked by numerous people (both guys and girls) whether I thought they looked good naked...

I was confused at that point but then soon realized like my friend Steph they too thought I resembled the trendy English Fashion Guru.

So when news broke that Gok was going to be in Australia for a Westfield's Style Tour I was tres excited to see him. And see him I did!


Follow the jump to read the rest of my entry, photos and video...

Gok himself was pretty chuffed that I did somewhat resemble him. Being Asian, having a semi quiff, thick black glasses and a quirky sense of style, seemed to of got he attention. Not to mention with help from my friend Steph. So he got me to go up on stage, so everyone could see. There I was standing right next to him; Martan and Gok on the one stage. Honestly I wasn't expecting any of this to happen and then getting up on stage and seeing the large amount of people and cameras, I was shaking in my H&M boots! 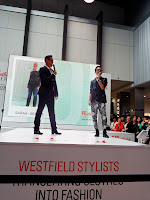 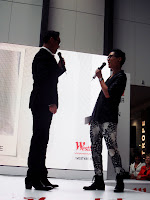 But he was really nice and gave me a signed copy of his autobiography 'Through Thick and Thin' which I can't stop reading I love love love it!. Throughout the style session he would randomly converse with me which was funny and I got up on the stage again for the competition to see which side of the crowd was loudest... I got the left side and I won!


All in all it was a great day, though it took me a while to register what had happened.
It was great to meet someone whom I do look up to as inspiration for myself venturing into the fashion world. Love love love!